How To Get Away With Murder (By Holding The Poor Hostage)

Today I would like to briefly address one of the worst defenses of abortion that is given, and of Planned Parenthood more specifically. It is a common talking point by celebrities and lay-persons alike, but it is one with virtually no substance. In fact, it is really a barbaric statement when it is reasoned to it’s logical implications. 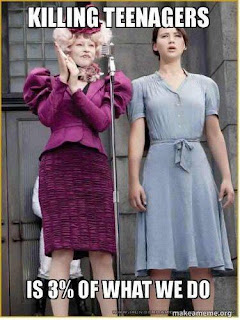 The claim goes like this: “Planned Parenthood should continue to get federal funding, since they provide a lot of services for poor Americans, especially women and minorities, that they wouldn’t get elsewhere. Plus, abortion is only three percent of what they do!”

I had this stated to me repeatedly(and quite loudly) by a student during a pro-life outreach with Students for Life of America in the San Diego area late last year. She was outraged at the material on the display, which quoted the statistics found in the Planned Parenthood annual report.

Now, aside from the dispute over where lower-income Americans can go to get quality healthcare(It’s a flat out lie that PP is the only organization in the nation that does provide these services, or will provide them in the future. A quick google search of local health care centers will prove that), the assertion also makes a fatal flaw: It “begs the question”; that is, it simply assumes that abortion is not the intentional killing of an innocent human being.

To show how this mistake happens, let’s pretend for a moment that a local hospital purposely killed a certain percentage of it’s patients in the pediatrics ward. If parents decide that their toddler is too much of a burden for them to take care of, they can have their toddler killed by the hospital staff, with no risk to the parents, whether medically, financially, or legally. To take this thought experiment a step further, suppose the hospital staff is caught dismembering the toddlers, and selling their body parts for profit to medical and research firms.

Would there be outrage? You’d better hope there would be.

Now imagine that after all of this outrage, the hospital’s PR department states that since the facility provides free, life-saving healthcare for the poor members of the community, then the state health department would essentially be “killing the poor” by shutting down the hospital in order to end the killing of toddlers(Which seems to be the hospital’s primary mission.)

In this case, the hospital PR department has essentially tried to get away with murder by holding the poor hostage. It’s like a criminal telling a victim of his crime, “Don’t go to the police, or else your loved ones will die.” Should any reasonable person go on to defend such an action? Not if they were committed to protecting the most vulnerable among us.

It should be obvious that Planned Parenthood doesn’t even care about the poor, no matter how emotional they are in the media. Especially when President Donald Trump offered to continue federal funding to them if they stopped their abortion “services”, they refused.(This is not a post to defend President Trump; it is merely to make a point). It should be plainly obvious to anyone who values truth over easy to get sex: An organization that supposedly cares for the “poor and downtrodden” will only do so if it gives them leverage in the public square. No one committed to justice should support such a behavior.

In conclusion, the arguments given in favor of Planned Parenthood can only be morally justified if the unborn are not human. Because if the unborn are in fact human(And the evidence shows they are), then we have a literal case of an organization that is getting away with murder, by attempting to hold large numbers of the population hostage. It’s amazing that anyone who is firmly committed to justice would be even remotely open to the idea that the poor and underserved could be used as a bargaining tool for political gain.