How The Christian Story Gives Life, Gender, and Sexuality Meaning

This week I was able to complete the newest book by Houston Baptist University professor Nancy Peacey, Love Thy Body: Answering Hard Questions About Life and Sexuality. 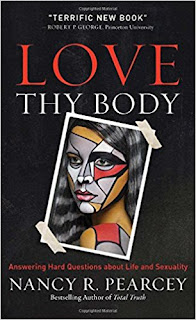 In her typical style, professor Pearcey takes the worldviews of the most hotly debated topics in our society today(Life ethics and sexual ethics) and relegates them in a way that is both understandable, yet still accurately conveys the philosophies behind the issues. She then goes on to argue for why the Christian worldview makes the most sense of the issues themselves(such as the importance and meaning of human life) in a way that doesn’t lose the sense of urgency behind many topics.

She takes on each topic in individual chapters, where she then breaks down the topic into a number of sub-sections, each of which is jam-packed with the insight that she carries with her everywhere she goes. Starting with the issue of abortion, she takes on the underlying philosophies of many of the key thinkers on the pro-choice side of the issue; mainly, the sort of “dualism” that drives many arguments in favor of abortion: The fetal being may in fact be human, but not in the sort of sense that we are obligated to care for and protect.

This argument has been articulated by a number of thinkers in a variety of ways(Thinkers like Peter Singer, Michael Tooley, Mary Anne Warren, and others) have all argued that it is certain key functions that will give a human being value that is to be respected by society at large.

However, this view has a number of fatal flaws, the biggest and most apparent Nancy highlights in in her section on the issue: We now have no basis for fundamental human rights, and thus, human equality is a myth for the ash heap of history.

Nancy suggests an alternative that is worthy of consideration: The only grounds for affirming the most famous line from the Declaration of Independence, that “All Men Are Created Equal”(Nevermind if the founders didn’t live up to this at all times. If the statement were to be rejected on that ground, we would have no standard to measure the founders life decisions up to) is best rooted in the idea of a Creator. Nancy argues that the Christian story provides not only the best explanation for human value, but for why we know humans are special kinds of beings with value in the first place.

She moves on to other topics in the later sections of the book, in particular, the implications of the sexual revolution in the West. Her chapter on the so-called “hookup culture” is particularly insightful, in that this cultural practice explains many of the biggest problems our society faces today.

Not only does professor Pearcey highlight the pain that “hooking up” for one night stands(having sex with someone that a person is not remotely interested in, other than for sexual interaction) brings to many young people, she goes on to argue for the Biblical worldview of sexual intimacy as having the most meaning when it comes to the question of sex. One segment of the chapter is a particularly insightful one: She gives an overview of the sexual ethic of the ancient Roman culture that the New Testament was written in, including the segments written regarding marriage and romance. In many circles today(Especially modern feminist circles), the Christian ethic as outlined in the New Testament by Paul and others is considered “anti-woman” and repressive.

However, as Nancy highlights, the Roman sexual ethic was not, in any way, “pro-woman”, pro-child, or even pro-man. Surveying historical analysis of the time, it is noted that sexual interaction was a form of prestige, and men within society would have many sexual partners, regardless of the approval of their spouses. Women weren’t even given a voice that was acceptable by the broader culture(There is a reason why many historians are astounded that the first witnesses in the Gospel accounts to the risen Jesus were women; Crafting a new religion to purposely woo the people would never have included such an embarrassing detail).

Enter in the Christian story. When Paul writes to the New Testament church that husbands should “Love their wives as Christ loves the church, and gave himself up for her”(Ephesians 5:25), he is saying something truly special: The Christian sexual ethic not only calls on men to show love to the women they are married to(Which Roman culture ignored the needs of women), but to love in a way that is self-sacrificing and other-centered. Far from a culture built on legalism, “chastity belts”, and fear, the Christian sexual ethic gives the deepest purpose and meaning to the love expressed within a marriage between a husband and wife, by using marriage(and other non-romantic relationships as well) to give humankind a picture of the love behind all of reality: The love of the Creator for His creation.

In conclusion, Nancy’s book couldn’t be any more timely. With growing cultural tensions, and with subjects like abortion, assisted suicide, sex and homosexuality, and gender identity coming directly into the living rooms of America, there are at least three groups of people who would most benefit from her book:

1. Parents: Many Christian parents are unsure of how to instruct their children in the matters addressed in the book. With Queer Feminist theory(and the worldviews behind it) and explicit sexual material making their way into even elementary age schools, many parents are at a loss of how to give their kids a way to think about the subjects being taught. While this book is most assuredly not appropriate for younger audiences, it can help parents start teaching their children how the Christian worldview makes the most sense of our world, and the issues surrounding us.

2. Christian college students: Unfortunately, many Christian students are woefully unprepared for the constant barrage of worldviews that are thrown at them as soon as they step onto a college campus. From freshman orientation onward, worldviews such as postmodernism, Marxism, secular humanism, and sexual libertarianism are being practically(and, at some schools, even literally) shouted on street corners and from rooftops. When I first attended my school, CSU San Marcos, during the transfer student orientation, several of the women’s studies professors encouraged the students to chant “Consent is Hot; Assault is Not” multiple times, and jokingly stated that even having “two or more” sex partners in bed at once was acceptable, as long as everyone agreed to be involved. These kinds of statements can make the task of not only living out one’s Christian faith on campus seem daunting, but having a thriving relationship with Christ that is a public witness can seem almost impossible. I would recommend, not only read this book before the school semester starts, but master it. Detailed margin notes, highlights, and unreadable pages from underlining are a must.

3. Pro-life advocates: A popular slogan of the United States Army is to “Train how you’ll fight”, and pro-life work is no exception. Unfortunately, I have noticed that many pro-life advocates can end up on the “front lines” under-equipped for the worldviews they will encounter when on the streets. This book will change that. Pro-life advocates will be equipped to understand not only the viewpoints of those they will meet who are defending an abortion-choice viewpoint, but also will be ready to respond with grace, truth, and compassion when needed most.

Love Thy Body hits bookstore shelves tomorrow nationwide, and I would argue, this is the most important book for Christians to pick up in the New Year of 2018.